Instead of crossed bones under the skull, as in the Jolly Roger, there are crossed railroad spikes representing the rich mining and railroad history of Colorado. When developing the mark we felt our logo needed a back-story. So we did some research and stumbled upon the story of Bob Womack. Bob basically sold what would eventually be the last and one of the biggest gold claims in Colorado for a bottle of whiskey and $500 bucks. Since that type of decision-making is something we are all too familiar with we decided to name our dude “Cowboy Bob”.” 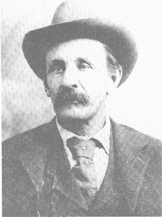 Photo left: Robert “Bob” Miller Womack. Picture taken in July, 1902 in Cripple Creek, Colorado when he was the guest of honor and Grand Marshall of the 4th of July parade. (Photo from collection of Linda Womack)

Here is his story:

He was a common cowpoke who loved his horses and cows on his small ranch in the Cripple Creek area. With a limited education, Bob Womack grew up on the family farm back in Kentucky until he came west with his father, mother, brother and sister in 1876. His father homesteaded land in Poverty Gulch . After settling in area, the unexplainable fever of searching for gold crept into Ole’ Bob as it did thousand of other men who journeyed west for the taste of adventure and fortune.

Bob had his dreams and followed the creek beds with his keen eye, searching for that last gold strike. He had a theory there was still gold in the valley of Cripple Creek. Not in the hills, but probably washed down in the creeks and rivers over the hundreds of thousands of years those hills had been there. One day, sure enough! He spotted gold in a creek bed near his family’s ranch in 1878. He followed the creek for years and figured a rich vein of gold was the supplier to this creek.

His search finally paid off on October 20, 1890 and Bob Womack staked his claim at the assay office in Colorado Springs. He called it the El Paso Lode. The find assayed at $250 a ton, but nobody paid attention to Ole’ Bob; they’d heard it before. The following spring, a mining man, Ed De LaVergne took some interest and formed the Cripple Creek Mining District on April 5, 1891. With the filing of his claim and the new mining district, Womack started the Last gold rush in Colorado. Within weeks, thousands of miners and prospectors, gambler and fortune seekers set up tents, cabins and lean-tos up and down the main dirt street of Cripple Creek.

The story goes, Ole’ Bob had a passion for liquor and sold his claim for $500.00 and a bottle one night at the local saloon. Some old-timers don’t hold with this theory. It must have been an overwhelming sense of euphoria for Bob to have finally located the source of the gold vein he knew all along was there. Whatever the story, Womack didn’t make out too well with his claim; about five million total dollars eventually came out of his original find. The El Paso Lode later became part of the rich Gold King Mining operations.

It wasn’t so much that Bob was looking to get rich, but to discover the elusive vein and piece together that incredible jigsaw puzzle of rock formations and erosion causing threads of high grade ore to run rampant. It may be true Bob sold his claim for $500.00 and a bottle, but probably because he had finally, after fifteen years of searching, proven, if only to himself, that there really was a vein of gold running smack-dab through Poverty Gulch! It most likely didn’t occur to him what a rich vein it really was. So went the story of hundreds of prospectors.